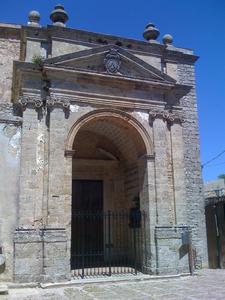 According to a legend, Erice, son of Venus and Neptune, founded a small town on top of a mountain (750 metres above sea level) more than three thousand years ago. The founder of modern history-i.e. the recording of events in a methodic and chronological sequence as they really happened without reference to mythical causes - the great Thucydides (500 B.C.), writing about events connected with the conquest of Troy (1183 B.C.) said:

"After the fall of Troy some Trojans on their escape from the Achaei on the sea towards the West arrived in Sicily by boat and as they settled near the border with the Sicanians all together they were named Elymi: their towns were Segesta and Erice".

This inspired Virgil to describe the arrival of the Troyan royal family in Erice and the burial of Anchise, by his son Enea, on the coast below Erice. Homer (1000 B.C.), Theocritus (300 B.C.), Polybius (200 B.C.), Virgil (50 B.C.), Horace(20 B.C.), and others have celebrated this magnificent spot in Sicily in their poems. During seven centuries (XIII-XIX) the town of Erice was under the leadership of a local oligarchy, whose wisdom assured a long period of cultural development and economic prosperity which in turn gave rise to the many churches, monasteries and private palaces which you see today. In Erice you can admire the Castle of Venus, the Cyclopean Walls (800 B.C.) and the Gothic Cathedral (1300 A.D.).

Erice is at present a mixture of ancient and medieval architecture. Other masterpieces of ancient civilization are to be found in the neighbourhood: at Motya (Phoenician), Segesta (Elymian), and Selinunte (Greek). On the Aegadian Islands – theatre of the decisive nav al battle of the first Punic War (264-241 B.C.) - suggestive neolithic and paleolithic vestiges are still visible: the grottoes of Favignana, the carvings and murals of Levanzo. Splendid beaches are to be found at San Vito Lo Capo, Scopello and Comino. The rocky coast around Monte Cofano is another scenic place in Erice's surroundings: every spot is located at less than an hour's drive from Erice.

As Erice is situated on top of a mountain at an altitude of 750 metres, it is much cooler than at sea level. Therefore, we would advise you to bring some warm clothing, and a windbreaker or anorak; the weather is rather unpredictable in Erice and the temperature can suddenly change.